An Interview with Master Gunnery Sergeant McKay and Major Margolis

06/20/2011 – In late April 2011, Second Line of Defense sat down with Master Gunnery Sergeant Thomas McKay and Major Margolis of HQMC Aviation Logistics Support Branch.  The focus was upon the strategic opportunities inherent the F-35 program to re-shape maintenance approaches and the adaptations the program will face as it adapts to the different Service maintenance cultures.

The technology associated with the program – the computer based logistics system, the diagnostic technologies built into the aircraft and global sourcing – provide a baseline from which the maintenance paradigm can be recast.  But the technology is an enabler but requires the Services to adapt their mental furniture.  McKay underscored that standardization of maintenance practices and norms.

To facilitate the opportunity to shape a new paradigm, the idea was discussed of using the Eglin JSF training facility as a location to build a cadre of commonality.  Why not have a maintenance Top Gun school based at Eglin?  Why not have special patches for the cadre of experts re-shaping the maintenance paradigm?

SLD: What are some of the cultural changes associated with the new maintenance approach?

Maj. Margolis: Ownership of parts.  The challenge will to fence or to unfence a particular group of spares at a base or a squadron or what have you from the global spares chain.

SLD: The challenge is to shift from a physical location of spares, which implies ownership to having custody within the global availability of parts?

Maj. Margolis: A physical location. It’s moving from the notion that it’s not mine per say. “My” parts located at my base are now open to support the global spares.  And this may well reduce the total cost of the system.

SLD: The other piece of this is global deployment.  If U.S. planes are operating in Japan and the Japanese buy F-35s then spares availability for both fleets goes up by being able to share parts, and one can see those parts within the digital system.

Maj. Margolis: That makes complete sense.  And I know the program officers working through this because it is easier-said-than-done. When you’re transferring a part from Country A to Country B even though the aircraft is sitting right next to each other during an exercise in country X, things like customs, clearance, and your trade rules, and laws, have to be sorted through. I know the program office is working through all those, but conceptually, it makes sense to you that you should be able to transfer a part from Country A to Country B, if that’s the only part that’s there.  It makes sense from a global support perspective.

SLD: It’s really a cultural revolution; you are going to have to think very, very differently to get the kind of outcome you want.  And the outcome you’re going to get is less cost, greater availability worldwide, and for the U.S. and its allies having greater capability forward deployed for less cost.  This is a huge gain for us, potentially, but not if we don’t restructure how we think and how we work.

MGySgt McKay: When I first got into the program a couple of years ago, the Nirvana was a USMC jet can land in an Air Force-Navy Base that has F-35s and be repaired, and fly home.  The reality is that nobody else wants to play in that world; the Air Force and the Navy have no desire to play the game that way.  Even the Marines at some point along the way have a real problem with somebody else fixing their toys and calling it good.

There is no standardization of maintenance practices among the services, let alone internationally. You’re talking an entirely different nightmare of, “I’m over-flying some other country, you need to land for whatever emergency, and need to get fixed.”  Traditionally, you send a maintenance crew from very far away to fix that one aircraft, takes days, and then you fly home.  Where if it was already resident on the base, why couldn’t you fix it right there with what you’ve got?

SLD: In this case, the technology is playing the role of the forcing function for change in the maintenance approaches?

MGySgt McKay: Absolutely. If they fix F-35s, they fix F-35s; it’s pretty standard schooling internationally.  We do it currently with commercial aircraft.

SLD: Exactly.  And that is the point; it’s more of a commercial standard procedure, than a mil spec procedure.

MGySgt McKay: We can’t even get our own bases inside of the Marine Corps to have that same type of agreement, without a couple of very high ranking individuals talking back and forth to each other to say, yes, you people are authorized to fix my jet.  And yes, you’ll do that and you’ll test it.  And then, my pilot will get in that jet to fly home.

We don’t do it today, anywhere even though that was the Nirvana of, “Hey, F-35 everywhere, everybody can fix it worldwide.”  When I first got into the program, that was the thing that everybody was first playing, was, “Hey, everybody can fix this jet anywhere.”  It will be one great big F-35 family.  Not so much in reality without standardization of maintenance practices. 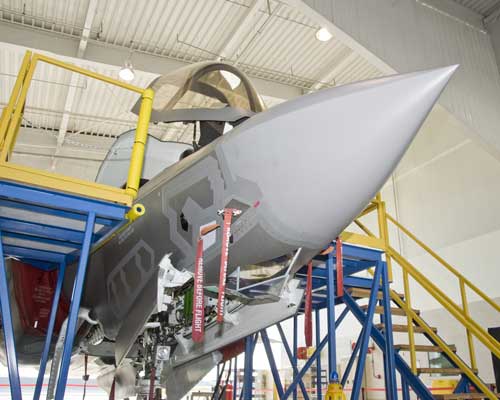 SLD: But clearly the technology can drive change. The problem with maintaining the maintenance stovepipes, as they exist now, is that the technology and the plane doesn’t require them.  It is as if Southwest Airlines with a common fleet of 737s would have three different maintenance cultures.  This makes no sense. Deployment differences among the services are real and adjustments to the culture needs to be made to provide for such differences but simply to ignore commonality is costly, ineffective and reduces core combat capability significantly going forward.

MGySgt McKay: Absolutely. If we can have the services drive towards even common terminology, this would be good.  For example, the USAF and the USMC do not have a common understanding of what being expeditionary means, and the maintenance challenges associated with expeditionary are different for the two services.

If we could get the services to agree on common terms and explanations of exactly what those mean.  Differences in services, absolutely, there should be were appropriate but working through expeditionary logistics is a good place to start, at least, so we’re talking on the same sheet of music.

Maybe one should be thinking about adding a core-competence to that schoolhouse of an elite corps of instructors who are actually bargaining through some of the language.  And of course, you have the advantage of having the maintainers from the different nations there and the different pilots, which are actually informed by some cultural reality as opposed to just making it up.  Does that make sense?

MGySgt McKay: It absolutely does.  And I believe the pilot portion is much more integrated than the maintainer side.  Because the core structure is broken out into modules, you can insert modules as you see fit for you service.

They can rebuild or they can build that courseware to fit a service need.  The pilots like combat integration.  USMC pilots like the fact that they fly with the Navy and will fly with the Air Force; maintainers, not so much.  You haven’t broken that paradigm at all. And breaking that paradigm will be crucial to taking advantage of what the F-35 program offers.

SLD: So you see this is as kind of a forcing function for greater standardization for maintenance?

MGySgt McKay: If the training will get us to a point where we’re integrated enough, then commonalities can make us close to the same expertise. Professionalism is professionalism; you take you car to Chevy or Dodge you expect it to be maintained at a certain level.  The commercial airlines do the same thing.  Whether it’s Brazil or Texas, you hope that every time you get on an airplane that it was professionally repaired.

No service wants to loose their uniqueness, absolutely.  We are different from the Navy and the Air Force and we want to keep that.  But, to be better, for some things, we have to absolutely get in bed with the other services and have commonality where appropriate.  And maintenance for the F-35 is clearly one of those areas.