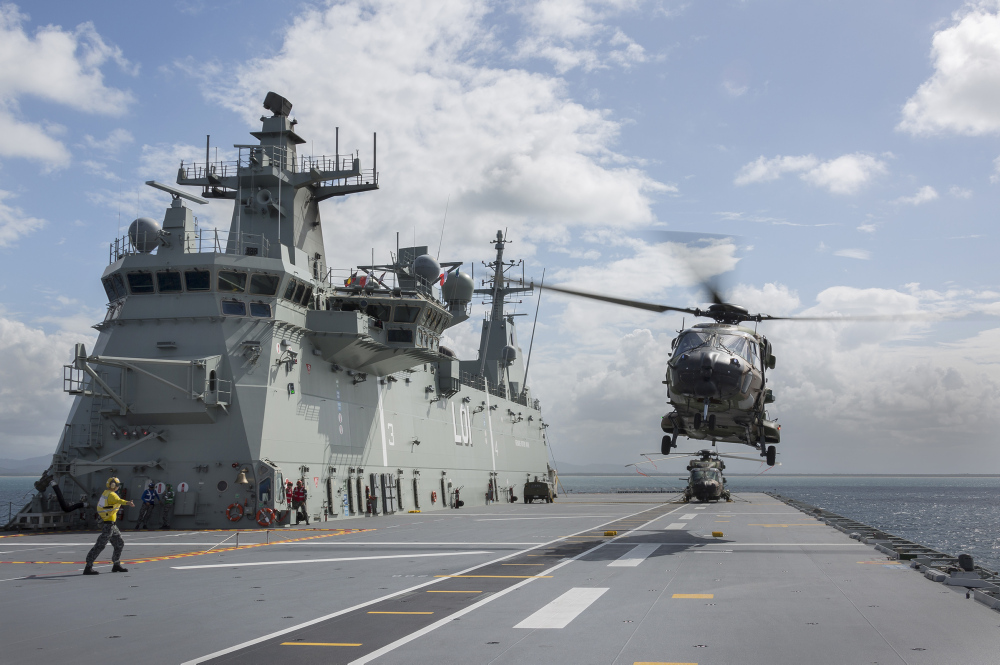 2016-06-08  HMAS Adelaide participated in Exercise Sea Explorer 2016 (EX SE16) from 25 May – 05 June off the coast of North Queensland as part of the certification process to determine its readiness to conduct amphibious operations.

The second Landing Helicopter Dock (LHD) to be commissioned into the Royal Australian Navy (RAN), HMAS Adelaide deployed for the first time with a combined force to continue its integration into the Amphibious Ready Element (ARE).

EX SE16 also afforded the RAN Test and Evaluation Authority an opportunity to evaluate HMAS Adelaide against the required operational capability as well as the conduct of vehicle trials with the LHD Landing Craft.

The Sea Series of Exercises, culminating with Exercise Sea Raider later in 2016, will test and evaluate HMAS Adelaide’s and HMAS Canberra’s preparedness as the core capability within Australia’s Amphibious Force.

Earlier this year, ABC News reported on the HMAS Adelaide and its arrival in Townsville in North Queensland which will function as the vessel’s second home.

The commander of HMAS Adelaide, Captain Paul Mandziy, called the ship the “Swiss army knife” of the fleet, because it was crewed by all three defence forces.

The 27,000-tonne ship can house more than 1,000 troops, and can generate enough power to run a city the size of Darwin.

“We like to describe ourselves as a small city on the water,” Capt Mandziy said.

“We have our own harbour, we run an airfield, we’ve got a hospital on board, we’ve got accommodation facilities for over 1,000 troops.

“We have great capability for landing helicopters — we’ve got six landing spots — we’ve also got four landing crafts so we can operate both in the air and the maritime environment.”

Townsville will be a second home for HMAS Adelaide, with at least 10 visits scheduled for 2016.

The ship will be returning in May for an amphibious exercise with Townsville’s 2RAR.

“Once we complete that exercise, that will allow us to be fully capable to conduct operations from the ship and become a valuable asset in the fleet so we’re looking forward to that,” Capt Mandziy said.

“We conduct a whole range of activities right from the low-level end with regards to humanitarian assistance and disaster relief, right up through the spectrum to high-end warfare with running troops ashore via boat and helicopter.”

The next Williams Foundation Seminar looking at new approaches to air and sea integration to be held on August 10, 2016 in Canberra will address this and other challenges to shaping the way ahead for the Australian Defence Force.

The Royal Australian Navy has had the ability to network and share situational awareness amongst the fleet for many years and the P-3s has been the only RAAF platform capable of being part of that network.

The RAAF’s journey of networking its capability journey started more recently with the Hornet Upgrade Program and has accelerated with the introduction of capabilities like Wedgetail and Vigilaire.  All of the the RAAF’s fleet is now capable of linking into and contributing to an Air Layer of the Joint Battle management system.

With the advent of 5th Generation capabilities like the JSF and the new combat systems on the AWD as well as the design and development of the new combat systems for the Australia’s future frigates, Offshore Patrol vessels and Submarines, the ADF has a unique opportunity to influence and design in an unprecedented level of integration into the RAN’s and RAAF’s new platforms.

That unprecedented level of integration should drive new thinking on the integration of air and sea power effects. The seminar is about examining the challenges and possibilities of the combat power in that future integrated force.

Air Force and Navy need to not only remediate existing deficiencies but take advantage of the transformative nature of fifth generation technology. The seminar aims to explore the art of the possible in future Air-Sea operations.

The seminar will be unclassified, mostly by invitation and at no cost to Defence and Williams Foundation members (who have taken membership before 30 May 2016).

Defence members can send an expression of interest to [email protected]

One of the new platforms which is coming into the picture and will be part of shaping new Air Force, Navy and Army integration possibilities is the P-8.

Not only are the Aussies working on the ground floor with the USN at Jax Navy on the P-8 but have just had the maiden flight of their first P-8.

The aircraft flew a short distance from Renton Airfield to Boeing Field in Washington State USA, to where the P-8A’s sophisticated mission systems will be installed as part of project AIR 7000.

With a saving of US$260m compared to the initial budget, the P-8A Poseidon aircraft were acquired through a cooperative program with the United States Navy and contracted to Boeing Defence Space and Security.

A Royal Australian Air Force crew will fly the aircraft to Australia in late 2016 following post-production checks and acceptance.