I first met Air Commodore Chipman when he was leading the initial Plan Jericho movement.

He now has become Director General of Capability Planning in the RAAF and is now faced with the challenge of infusing the forward thinking represented by Plan Jericho into actual capabilities.

And doing so clearly is about shaping the evolving force into a more integrated direction.

Plan Jericho is a compass not a road map; but now is working the challenge of shaping programs to move down the direction where the compass is providing some guidance.

And it is clearly not easy.

Notably, with the RAAF introducing new platforms across the board, weaving those into a comprehensive capability, let alone an integrated one, is very challenging. 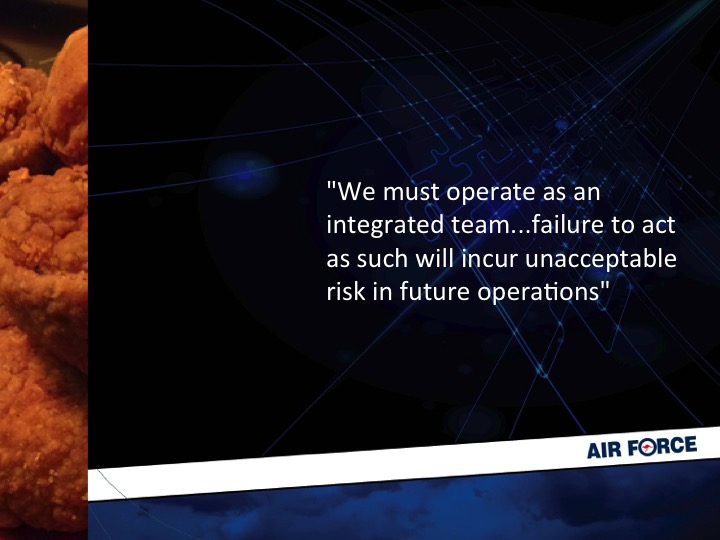 In his remarks to the Williams Foundation seminar on force integration, he underscored the importance of generating key thrusts within force development that allow movement in the right direction.

In my interview with him, he underscored that one of the problems is clearly ensuring platforms stay on track, such as the F-35 transition effort which is under his office’s responsibility.

His office also has responsibility for the missile defense program discussed at Williams.

He highlighted that the challenge of generating a future direction comes into conflict with program management.

“The biggest danger, is that as things crop up, and one particular project has a crisis, a financial crisis or something that jeopardizes what government has approved you to achieve, then you get focused in on solving that problem at the expense of thinking more broadly about our strategic direction.”

He sees a key ahead as shaping a community of 21st century operators who have a shared perspective on shaping joint effects as the strategic direction.

He saw the Air Warfare Centre and its service counterparts as a key locus where shaping such a community of thinking and interest in shaping a way ahead for building a joint force. 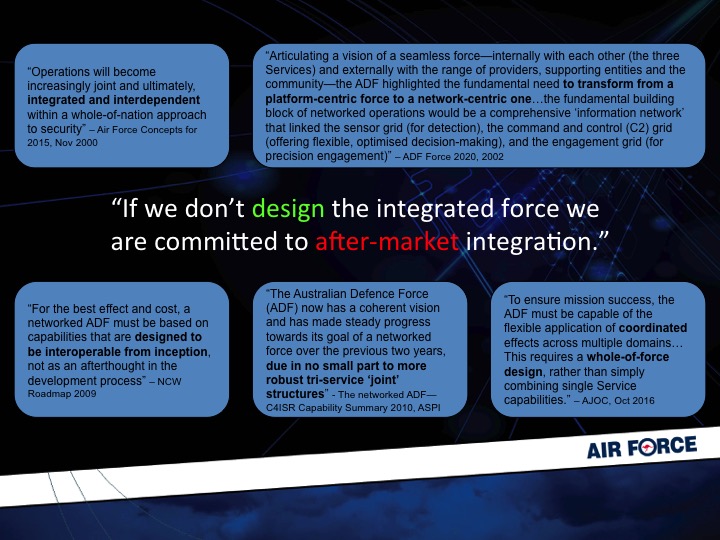 And clearly there needs to be practical cases or thrusts within program development which can provide the push necessary for greater program design for integration.

“We need to have broad enough of a perspective so that we can drive programs towards joint outcomes.

“For example, it will be crucial to bring E-7, with F-35 and air warfare destroyers into a common decision making space so that we can realise built in capabilities for integrated air and missile defense.”

“And that needs to be informed by shaping a common perspective with the USN and USAF as well.

“Let’s take integrated air missile defense as an example, because the project part of that at the moment within Air Force is Air 6500, a project that I’m responsible for.

“We’ve received strategic guidance that we should be interoperable with the U.S. in their Pacific theater.

“We need to put a little bit more definition to that. What is our vision for a theater air missile defense system between Australia and the U.S.?

“We need to integrate our platforms with a clear view of how to maximize our working relationship with the USN and USAF as a key driver for change as well.” He emphasized the need in effect for practical steps forward at the tactical levels as key drivers for change as well.

“The force is clearly innovating tactically and we need that innovation to be informing ways to reshape integrated capabilities going forward.”

For example, the RAAF is looking at a new UAV to add to the force, and the Air Commodore saw that as best done by shaping and leveraging the creation of the ISR hub at RAAF Edinburgh.

And any new UAV should emerge from the integrated P-8/Triton efforts from that hub.

“Platform acquisition in future clearly will need to be informed by integrative innovations and the 21st century network of warfighters, as you put it.”

And the RAAF needs to find ways to prepare and promote disruptive change.

In part that will be done by shaping a community, which has confidence in its ability to promote change and work towards a joint effect from any acquisitions going forward.

“Predicting the future accurately is hard. What we need is to develop confidence in our ability to adapt quickly as the future changes and evolves in front of us and to be able to respond to those changes.

“It is about creating organizational capacity and confidence to be able to respond to an evolving future.”

The Jericho project team is now working on ways for the RAAF to understand and anticipate disruptive change.

They are focusing on a concept called disruptive thinking. We are working with the private sector and with academia to find pockets of excellence able to come up with new ideas and new ways of using fielded technology to help with defense’s mission.”

He articulated where he would like the RAAF to be able to position itself in the future.

“I would love to see Air Force become earlier adopters of technology. I think at the moment we wait until technology is too mature before we bring it into service.

“We live in a region where competitors are clearly innovating rapidly.

“If we’re able to bring ourselves forward on that technology acceptance curve, I believe that would be a really good outcome for us.”