During our recent visit to Naval Aviation Warfighting Development Center or NAWDC, Captain Leif “Weed” Steinbaugh, Director of Training at NAWDC, provided our first briefing which oriented us to the changes at NAWDC since we last visited Fallon Naval Air Station in 2014. 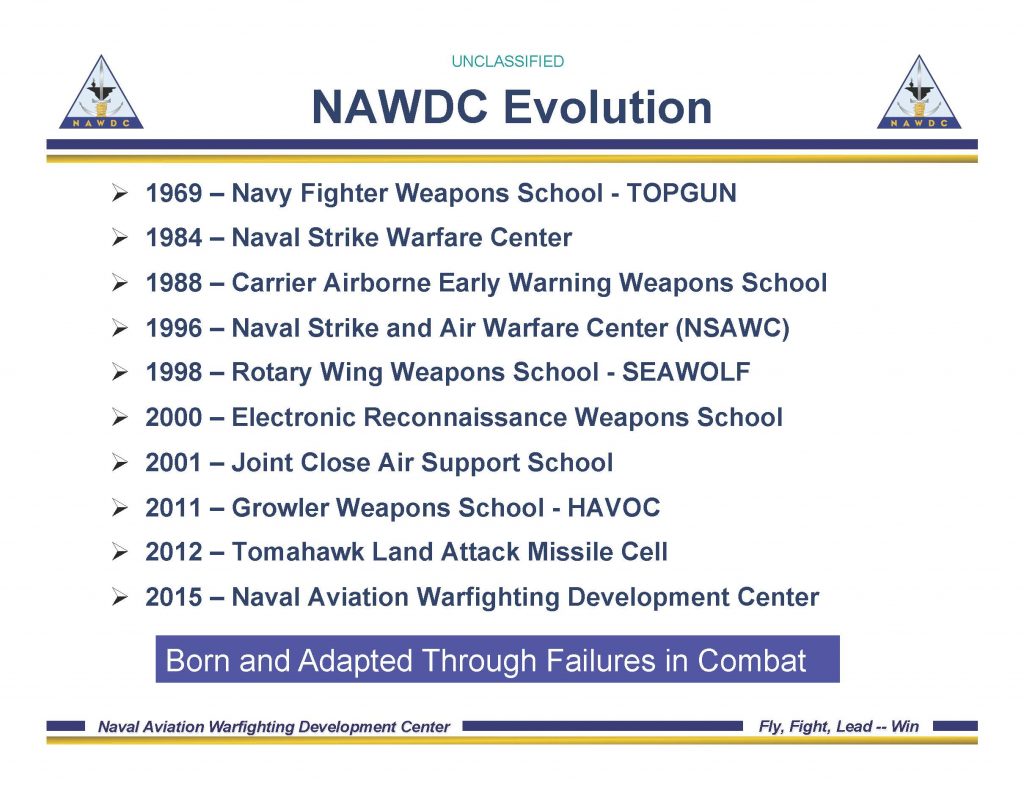 This change of name is very significant and represents a culmination of the work of the Top Gun era and the laying the foundation for the integrated Warfighting approach for the distributed fleet, which the US Navy is shaping with the fleet it has and the fleet, which is on the way.

Captain Steinbaugh has a significant background in Electronic Warfare and strike operations as well.

He first flew A-6s, then went to Prowler and then to Growler.

This is his fourth tour at Fallon as well. His first tour was with the strike department, the second he set up the Growler department and the third was in the training department.

“The focus was on proficiency with the platform, at the individual level with integration in the final week of Air Wing Fallon.

“TTPs were approached from this perspective.

“Then as now we train the training officers for the Carrier Air Group or CAG.” The name change reflects a strategic shift in the US Navy towards integrated Warfighting and, by definition almost, because integration is crucial to success, to an enhanced focus on the high end fight.

NAWDC was the first of a series of Warfighting development centers which have been stood up and which the Navy is leveraging for the evolution of the integrated Warfighting approach.

There are several Warfighting development centers: for surface and mine warfare, underwater warfare, for information warfare, for expeditionary warfare.

Currently, the closest working relationship between NAWDC and the other Warfighting centers is with the surface Warfighting development center, and with the potential to cross link aviation with the weapons onboard surface ships this lays a solid foundation to go where the technology is evolving as well.

There is a monthly video teleconference among the Warfighting development centers. “ We focus on TTP development and doctrine, on upcoming major exercises and any Commander interest items that the Commanders may have.

“The biggest change with the Warfighting Development Centers is our ability now to integrate with the other communities, and to gain a better understanding of the evolving mission areas.”

The culmination of the training process at NAWDC is Air Wing Fallon when the air wing about to go on deployment comes for its final training.

“Their training track, if you will, is to get ready for deployment.

“The first week, week and a half, we give them the plan, we do everything for them.

“They don’t have to do any of the planning.

“They just have to execute.

“Once we see that they can execute, we’ll get to the next part where they get more involved in the planning, we tighten the timelines down a little bit on them so it provides some pressure.

“We up the game, if you will, on the threats side of things so things feel a bit more real, and finally the last week is ATP, the advanced training phase, where they are pretty much on a timeline.

“We may see out on deployment, whoever might be out there at the time and they then execute there.

“The threat is about as high as we can ramp it up to.”

Captain Steinbaugh highlighted what the training command is doing now but how the transition implied in the name change was laying the foundation for a way ahead towards more effective fleet integration.

With new buildings being added for simulation and training a new phase will be added.

Captain Steinbaugh is a native of Quantico, VA. He earned his commission in May 1990 from the United States Naval Academy, where he received a Bachelor of Science degree in Mechanical Engineering.

He was designated a Naval Flight Officer in April 1992 and was assigned to Attack Squadron (VA) 128 for training as an A-6E Bombardier/Navigator. After completing training in July 1993, he was assigned to the “Boomers” of VA 165. While assigned to VA 165 as schedules officer and line division officer, he completed one Western Pacific/Arabian Gulf deployment and decommissioned the squadron in August 1996. He then was assigned to Commander, Medium Attack Wing, Pacific as part of the A-6E “Shoretail” detachment until the retirement of the A-6E. Selected for transition to the EA-6B Prowler, he reported to Electronic Attack Squadron (VAQ) 129 in December 1996 for training as an EA-6B Electronic Countermeasures Officer.

After graduating from VAQ 129 in January 1998, Captain Steinbaugh was assigned to the “Gauntlets” of VAQ 136 in Atsugi, Japan for a “Super-JO” tour. While with VAQ 136 as the personnel officer and assistant maintenance officer, he completed two Arabian Gulf deployments and numerous Western Pacific deployments. Promoted to Lieutenant Commander in August 2000, he was extended in VAQ 136 in order to complete his department head tour, serving as the squadron’s operations officer.

From January 2002 until January 2004, Captain Steinbaugh was assigned to VAQ 129 as the maintenance officer and as a fleet replacement squadron instructor. In January 2004, he was assigned to the Naval Strike and Air Warfare Center Strike Department as the electronic warfare division officer, where he instructed carrier air wings in Suppression of Enemy Air Defense tactics. Captain Steinbaugh was then assigned to the staff of Commander, Naval Air Forces, as the EA-6B/EA-18G Class Desk Officer from July 2005 to January 2007. He then proceeded to VAQ 129 for refresher training and reported in November 2007 to VAQ 131 as the executive officer. He assumed command of VAQ 131 in February 2009. In May 2010, he reported back to VAQ 129 for transition to the EA-18G.

Appendix: The Structure of NAWDC

N2:  The Information Warfare Directorate at NAWDC is responsible for ensuring command leadership and personnel are provided the full capabilities of the Information Warfare Community (IWC) to support combat readiness and training of Carrier Air Wings and Strike Groups.  The Directorate is comprised of four areas of focus: Air Wing Intelligence Training, the Maritime ISR (MISR) Cell, Targeting, and Command Information Services (CIS).

N3:  NAWDC Operations department (N3) is responsible for the coordination, planning, synchronization, and scheduling for the operations of the command, its assigned aircraft, and airspace and range systems within the Fallon Range Training Complex (FRTC).

N4:  NAWDC’s Maintenance Department is the heart of training for all the NAWDC schoolhouses.  Maintenance’s focus is providing mission-ready fleet and adversary aircraft configured with required weapons and systems for all training evolutions.  We support day to day training missions with the F-16 Viper, F-18 Hornet and Super Hornet, EA-18G Growler, E-2C Hawkeye and the MH-60S Seahawk; conducting scheduled and un-scheduled maintenance on 39 individual aircraft.  These aircraft and weapon systems are the foundation for all other NAWDC Department’s training syllabi.

Also provides subject matter expertise support to strike group commanders, numbered fleet commanders, Navy component commanders and combatant commanders; to lead training and warfighting effectiveness assessments and identify and mitigate gaps across all platforms and staffs for assigned mission areas as the supported WDC; and collaborates with other WDCs to ensure cross-platform intergration and alignment.

N6:  Carrier Airborne Early Warning Weapons School (CAEWWS), also referred to as TOP DOME, is the E-2 weapon school and responsible for Airborne Tactical Command and Control advanced individual training via the Hawkeye Weapons and Tactics Instructors (HEWTIs) class.  CAEWWS is also responsible for development of community Tactics, Technique and Procedures and provides inputs to the acquisition process in the form of requirements and priorities for research and development (R&D), procurement, and training systems.

N7:  In the early stages of the Vietnam War, the tactical performance of Navy fighter aircraft against seemingly technologically inferior adversaries, the North Vietnamese MiG-17, MiG-19, and MiG-21, fell far short of expectations and caused significant concern among national leadership.

Based on an unacceptable ratio of combat losses, in 1967, ADM Tom Moorer, Chief of Naval Operations, commissioned an in-depth examination of the process by which air-to-air missile systems were acquired and employed.  Among the multitude of findings within this report was the critical need for an advanced fighter weapons school, designed to train aircrew in all aspects of aerial combat including the capabilities and limitations of Navy aircraft and weapon systems, along with those of the expected threat.

In 1969, the United States Navy Fighter Weapons School (TOPGUN) was established to develop and implement a course of graduate-level instruction in aerial combat.  Today, TOPGUN continues to provide advanced tactics training for FA-18A-F aircrew in the Navy and Marine Corps through the execution of the Strike Fighter Tactics Instructor (SFTI) Course.  TOPGUN is the most demanding air combat syllabus found anywhere in the world.  The SFTI Course ultimately produces graduate-level strike fighter tacticians, adversary instructors, and Air Intercept Controllers (AIC) who go on to fill the critical assignment of Training Officer in fleet units.

N9:   The NAWDC Safety Department (N9) serves as the principle advisor to the Commander on all matters pertaining to safe command operations and is responsible for administering the following safety programs: aviation, ground, ergonomics, motor vehicles (personal, commercial), recreation, and on- and off-duty.  Our goal is to eliminate preventable mishaps while maximizing operational readiness.  We accomplish this by preserving lives, preventing injury, and protecting equipment and material.

N10:  The US Navy’s Airborne Electronic Attack Weapons School, call sign “HAVOC”, stood up in 2011 to execute the NAWDC mission as it pertains to Electronic Warfare and the EA-18G Growler.  HAVOC is comprised of highly qualified Growler Tactics Instructors, or GTIs, that form the “tactical engine” of the EA-18G community, developing the tactics that get the most out of EA-18G sensors and weapons.  HAVOC’s mission is also to train Growler Aircrew and Intelligence Officers on those tactics during the Growler Tactics Instructor Course.

N20:  The Tomahawk Landing Attack Missile (TLAM) Department provides direct support to U.S. Fleet Forces Command (USFFC) in the development and standardization of tactics, techniques and procedures for the employment of the Tomahawk weapon system.  In addition, TLAM provides training to the CVW, fleet, and joint commands on TLAM capabilities and strike integration