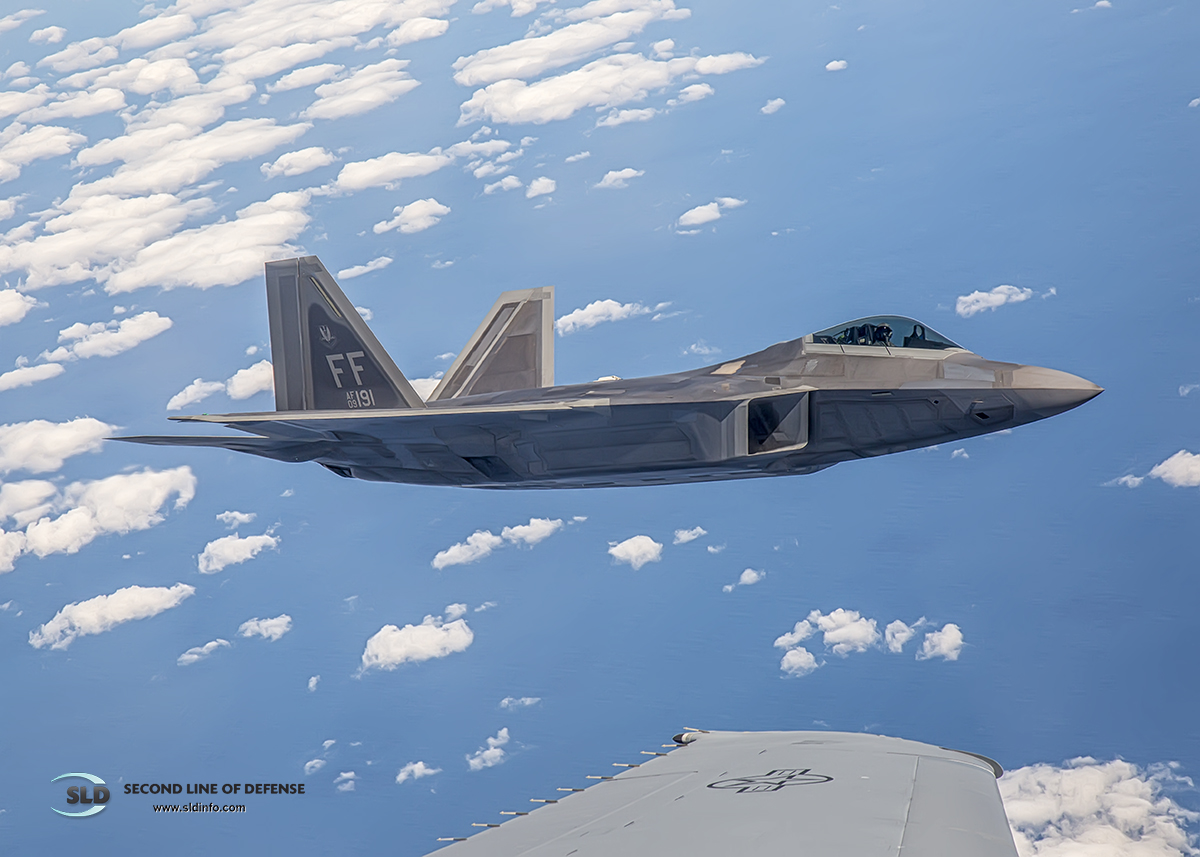 I have dealt with the F-22 for many years and first visited the First Fighter Wing in 2007 as the plane was being stood up and introduced to the force.

What was anticipated and hoped for with the introduction of the first fifth generation aircraft is clearly now being realized, although, unfortunately, at much lower numbers than the USAF desired or needed.

With the shift from slo mo to higher intensity operations, the F-22 is providing a key leadership role within the US and allied air combat forces in reshaping of the concepts of operations to ensure that the liberal democracies can prevail against their adversaries.

Col. Hinds is a veteran F-15 pilot who transitioned to the F-22 in 2006 and has significant operational and training experience with the aircraft.

Combat aircraft go through a 10-year maturation cycle as they become more mature.

This is certainly true of the F-22 which is now a very busy global asset, which Combatant Commanders wish to have in the Area of Operation as well as allied air forces wish to fly with, to make their own combat aircraft more “lethal and survivable” as an RAF Typhoon pilot described how he looked at flying with the F-22.

Col. Hinds throughout our discussion underscored the maturation of the aircraft and its high in demand situation.

“We’re really starting to use the airplane exactly how we envisioned it.

“For 4th gen aircraft, in particular, their survivability and capabilities both are increased.”

With regard to deployments, he noted that F-22s have operated globally. One demand side is in theater security packages where the F-22 goes to a theater of operation and works with the other air combat elements, as it is doing currently in Europe.

But over the past three years, the F-22s have been operating in the Middle East on a regular basis in conducting combat operations in Operation Inherent Resolve.

“When the F-22s entered the theater, we operated as a very flexible air combat asset.

“It was a pretty big game changer in terms of how adversaries reacted to our force packages.”

We discussed the important shift as the maintainers mastered the plane and support it globally in expeditionary operations.

“They have clearly learned over the past 12 years how to maintain a low observable aircraft in operations.

“They have evolved as well with the computer-generated nature of maintenance, in which the plane can indicate what is wrong with it and needs fixing.

“They are often working software versus hardware fixes and often do not have to swap out a part, where in a legacy aircraft they would be swapping out a part.”

“The maintainers you were talking to a decade ago are now our senior master sgts and maintenance supervisors.

“They have gained a decade of experience in supporting the plane and it is a key part of what makes our F-22 deployments so effective.”

F-22s in European Training from SldInfo.com on Vimeo.

I asked him to compare his experience flying an F-15 with operating an F-22.

“That is a great question.

“The tactics of the F-15 were well evolved as were our understanding of the limitations and capabilities of the airplane.

“You beat your chest and you hung out in the con-trails and said, ‘Here I am. Come get me. We’re going to kill you all.’

“But in the F-22, you have significantly greater flexibility in terms of dealing with the adversary and can focus on your best opportunity to take them down, whether it’s an airplane or a surface to air missile system.”

Put in other terms, a key difference between operating a legacy force compared to a fifth generation enabled one is how you think about the operational combat space.

“You can take this jet, put it in places that you just can’t go with fourth gen airplanes.

“The speed, the super cruise, the integrated avionics, and stealth are the big game changers on tactics and what you can really do with the jet.

“The F-22 is changing the way the nation can fly air combat.”

He described the impact this is having on the USAF leadership and their contribution as well.

General Wolters, the USAFE commander, clearly has emphasized the importance of the F-22 and the F-35 in reshaping deterrent air combat capabilities in the European theater.

“He definitely wants fifth gen in his AOR.

“We were just there with the 94th Fighter Squadron two weeks ago.

“We were flying missions out of England.

“We were over in Germany.

“We were in Poland.”

And the Air Component Commander for US Central Command, Lt. General Harrigian, comes from the F-22 and has recognized the capabilities of the pilots to operate with greater flexibility as well.

“Lt. General Harrigian has expanded the amount of authority and decision making allowed by the pilots, which certainly fifth generation aircraft can deliver.

“Our pilots, once they understood his vision and his commander’s intent, are meeting the challenge.”

From my own travels, it is clear that the F-22 showing up globally has changed allied air force’s thinking about fifth generation capabilities and clearly F-22 has cleared the way for a number of allies considering the F-35 version of fifth gen.

“Our allies have seen in the Middle East, at Red Flag or Trilateral Exercises, how the F-22 expands significantly the room for maneuver for the entire air combat force.

“When you combine the capabilities of a fifth gen plus non-kinetics effects, then it’s pretty impressive.

“I’m not sure how many adversaries are doing that quite yet.”

Col. Hinds concluded by highlighting the importance of high-end readiness to be prepared for the high-end fight.

“It takes years of practice and thinking about how to integrate space and cyber with the kinetic strike force, to get the right time and tempo.

“How do you shape the right force package at the right time and the right place to have the tactical and operational effect, which you need to achieve?”

F-22 Air Refueling over Iraq from SldInfo.com on Vimeo.

“I’ll be honest with you.

“Our Airmen, whether the pilots, the maintainers, or the intel professionals and the mission planners who help us get ready for combat, are doing a really good job.

I hope you get to come back to do a deep dive on the maintenance part of the 1st Fighter Wing and experience how we actually train for the high-end fight. It’s what we do every day.”

Col Jason Hinds is the Commander of the 1st Fighter Wing, Air Combat Command, Joint Base Langley-Eustis, VA. He is responsible for the worldwide rapid deployment and employment of F-22 air dominance fighters in support of Combatant Commander taskings. He oversees 1,400 personnel, two airfields, two groups and five squadrons, including two F-22 fighter squadrons and a T-38 Adversary Air detachment.

He is a command pilot with over 2,200 flying hours to include combat sorties in Operations DESERT FOX and SOUTHERN WATCH.

Editor’s Note: In later stories we will focus on the F-22 maintainers and how they have supported the aircraft in expeditionary operations as well as the very interesting working relationship between the 1st FW and the Air National Guard alluded to in this story published on October 12, 2017 at the time of the return of the Wing from the Middle Eastern AOR.

JOINT BASE LANGLEY-EUSTIS, Va. – Over 100 members assigned to the 1st Fighter Wing returned to Langley Air Force Base today after a 6 month deployment to the Middle East. During their deployment, F-22 Raptors participated in Operation INHERENT RESOLVE against the Islamic State in Iraq and Syria.

While the 1st FW’s 27th Fighter Squadron was the lead element deployed, they were joined by personnel from the 27th Aircraft Maintenance Unit as well as Virginia Air National Guard Airmen assigned to the 192nd Fighter Wing.

“When we go to combat, it is truly a total force effort with our 192nd FW partners,” said Hinds.

The 1st FW homecoming was not quite complete, as some F-22s remained in Europe as part of the European Deterrence Initiative.

“The F-22 is America’s premier air dominance fighter, and our mission to Europe provides us an opportunity to train with our allies and strengthen our partnerships.” said Hinds.

While in the Europe, the F-22s will also forward deploy from the United Kingdom to other NATO bases to maximize training opportunities, demonstrate our steadfast commitment to NATO allies and deter any actions that destabilize regional security.

“Today’s homecoming is great.” said Hinds. “But we won’t really be home until everyone returns from Europe.”