The Japanese are reworking their defense capabilities to provide for enhanced perimeter defense.

We projected this trajectory for Japanese defense policy in our book on Pacific defense published in 2013.

According to the preface to the Japanese Ministry of Defence’s overview of the way ahead for its defense programs:

Japan will steadily improve its defense capabilities as the second year of the “Medium Term Defense Program (JFY2019 – JFY2023)” (MTDP) (approved by the Cabinet on December 18, 2018) based on the “National Defense Program Guidelines for JFY2019 and beyond” (approved by the Cabinet on December 18, 2018) in order to build a truly effective defense capability, “Multi-Domain Defense Force”.

In order to realize cross-domain operations, the Self-Defense Forces (SDF) will acquire and strengthen capabilities in new domains, which are space, cyberspace and electromagnetic spectrum by focusing resources and leveraging Japan’s superb science and technology.

Furthermore, to be able to sustain a range of requisite activities at all stages from peacetime to armed contingencies, sustainability and resiliency of defense capability including logistics support will be enhanced.

Moreover, Japan will prioritize reinforcement of human resource base in the face of aging population with declining birth rates and technology base regarding advances in military technology, as well as strengthening Japan- U.S. Alliance and security cooperation with other countries in light of changes in security environment.

Furthermore, SDF will further promote joint-ness of the Ground, Maritime and Air Self-Defense Forces in all areas, avoid stove-piped approach and optimize their organizations and equipment.

Considering increasingly severe fiscal conditions and importance of other budgets related to people’s daily life, Japan will work to achieve greater efficiency and streamlining through various measures to streamline procurements while harmonizing with other policies and measures of the Government.

In our look at the Chinese military challenge and the approaches being taken interactively by Japan, the United States and Australia, the Japanese role was described as follows:

In our 2015 book on Pacific defense, a key part of the analysis revolved around the reshaping of Japan’s defense concept.

The Japanese concept for the dynamics of change was the need for a new “dynamic defense” concept in which the SDF was able to integrate much more effectively with new 21st century capabilities such as acquiring Ospreys, F-35s and rebuilding their Navy to be able to extend the perimeter of their defense beyond a narrow concept of homeland defense.

At the same time, the approach has been clearly constrained due to historical memories and experiences, but it is about shaping greater air land, maritime integration to provide for a “defense bubble” over the nation and one which can interoperate with its closest ally the United States, but also reach out to Australia in their mutually expanding relationship.

One of the key features of our appraoch was and continues to be how to leverage the new systems we are already bringing on line which allows us to expand our deterrence in depth capabilities.

There is way too much emphasis Inside the Beltway on hypothetical wartime futures, rather than taking a hard headed look at the full spectrum crisis management challenges facing us now and into the decade ahead and military capabilities be interlinked with appropriate allied and national political strategies.

To get the world in 2050 without domination by the authoritarian powers, we have to effectively engage in co-opetition with them in the decade ahead, and exercise the kind of military capabilities which empower political engagement and effective crisis management.

We argued in our 2103 book on Pacific strategy, that Japan would work to enhance its perimeter defense and move eventually towards what we called a two anchor appraoch.

We argued that expanded perimeter defense is a key part of what we referred to as the “dynamic defense” phase in Japanese policy.

We argued that “this meant greater reach of Japanese systems., better integration of those systems within the Japanese forces themselves, more investments in C2 and ISR, and a long-term strategy of reworking the U.S.-Japanese military relationship to have much greater reach and presence.

“The dynamic defense phase carries with it the seeds for the next phase — the shaping of a twin-anchor policy of having reach in the Arctic and the Indian Ocean.

“Obviously, such reach is beyond the capabilities of the Japanese themselves and requires close integration with the United States and other allies.

“And such reach requires much greater C2, ISR and weapons integration across the Japanese and allied force structure.”

In the graphic below, the box highlights the expanding perimeter of defense in which the defense bubble needs to operate.

But as they build out more effective forces, ones which are capable of integrability, they can enhance as well their capabilities to operate with allies in defending the Northern and Southern reaches of their defense concerns as well., 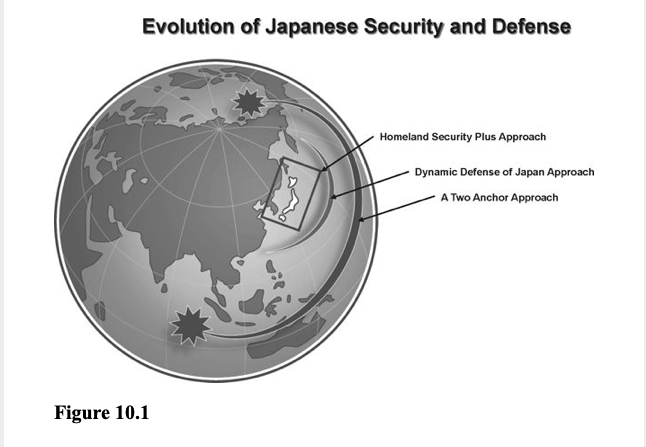 An overview published by the Japanese Ministry of Defence to Japanese defense programs, 2020, can be read here: