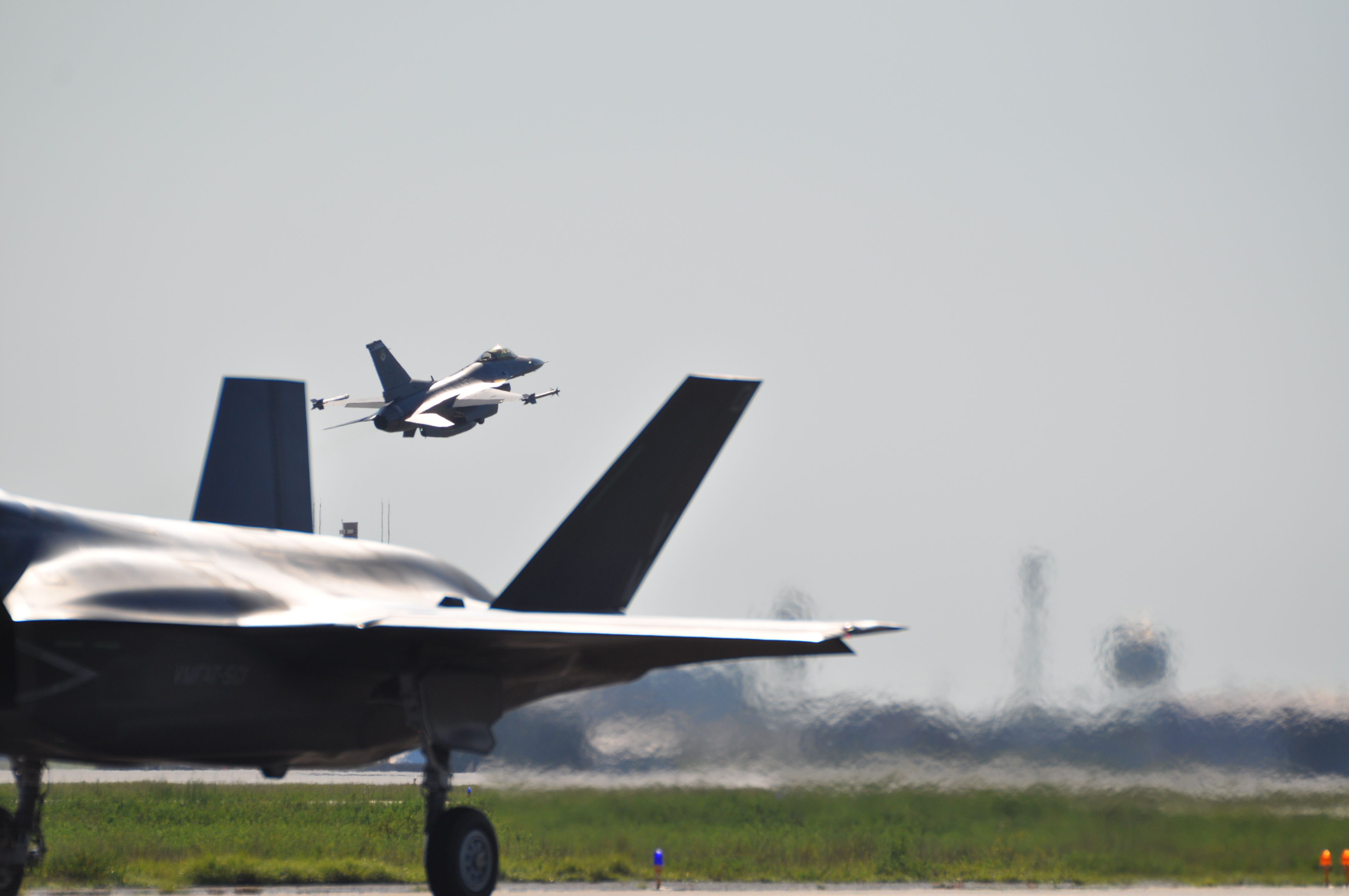 It is great to hear the excitement in the voices of the testers and the latest operators of the fifth generation fighters.

They reflect the hope for the future of air dominance that the requirements community and the design engineers intended for continuing the peace that we as a nation have enjoyed and have offered to the world for the past half century.

Now with a multi-polar world emerging; and with the United States seemingly ceding its technological dominance by slowing down the emergence of the fifth generation aircraft and terminating the best outright performer in the F-22 at a much lower quantity than requested; and instead moving to a coalition of equals with the F-35; there is a certain nip in the air.

We last saw this as we broached the skies of Korea.

We came to realize that we needed to catch up with the forces of design from the then Soviet Bloc.  In response, we had a burst of talented entries in the Century Series Fighter. Later as we learned that the F-4 was not survivable against the Ground Based Air defenses in North Vietnam, we invested in the F-16/F-18 and the F-15 following advances in the RADAR available.

These aircraft first entered service in the mid 1970’s; almost 40 years ago.

Today they are better; but one wonders about the combat arena; and whether this is the right bet.

Are upgrades on 40-year airframes, with a very slow roll out of 5th generation “replacements” a sound strategy?

Though we hope to never find out; and pray that our strength will never be tested, the current situation should be looked at as an inter-war period; where resolve is often tested; and teams form through treaties; and common defense postures.

In this regard, one needs to assess the value to the enterprise; whether Defensive or Offensive that an investment would bring.

For example; if information is to be the asset of greatest importance, then we need to ensure its availability and capability for transmit and receive to all of the force structure to be engaged.

Based upon the admonition of the then Chairman of the Joint Chiefs; that the national debt ranks as a national enemy, our military investment faces tough scrutiny.  Interestingly; the United States is resting on past strengths and has a very difficult time adapting to technologies particularly if there is an upset to the order of battle.

Although we’ve had Unmanned Air Vehicles for many years, we needed Global Positioning and Satellite communications to put them into the front lines of warfare.

Now that our forces have them, it seems very difficult to alter the role of the Remotely Piloted Aircraft as used to date and extract new and different utility from these workhorses that fly friendly skies.

One simply has to watch on U Tube the self-filmed death of a Georgian Remotely Piloted Aircraft by a Russian Mig-30 Aircraft missile to realize the vulnerability if they are not protected.

In fact as one watches the film; one wonders if the Russian Pilot would have been so bold had the warning audible been on his Head up Display from a second RPA or from a protective follow Aircraft.

The response of the services has been a study in outlook.

The USMC is driving forward with an entirely new definition of Air Assault that would make the 82nd Airborne proud; combining the agility of the ‘Z axis”, with the speed and capability of the Osprey and the JSF.  They are fundamentally altering the operational concept of force employment; and none to subtly increasing their reliance on Satellite Positioning; as well as Vertical Logistics for resupply.

The Navy is moving to increase the fleet of F-18’s and slowing the UCAV program. The UCAV is the only Navy stealth unit.  This series of investment decisions is occurring while they push out the F-35C.  Navy Pilots are among the best in the unified test squadron; and therefore are fully conversant with the likely outcome for any engagement of integrated air defenses; as is being employed by Iran, and China; and in part in Syria with the support of the Russians.

A far better outcome is to accelerate the investment in F-35c and the UCAV; to allow for better detection and for better expeditionary actions.  The expectation that in this way they will protect the number of carriers is not sufficient and should be separated in concept from the Air Component.

A different way to look at the construct is to deploy the carriers with a minimal air component, including two UCAV’s per carrier for defensive observation and potentially, if armed, for limited offensive action.  This concept would use the agility of the F-35C to move up to the carrier and be the aggressor from that geospatial location.  With the speed of the F-35; deployment from the several available Naval Aviation Bases would mean a likely 8-hour time from deployment order to arrival on the carrier.  This would provide the Navy command structure with enormous potential at the point of attack; and provide the Naval Aviation Component with the right generation of aircraft to engage.

The Air Force Investment is informative; as with the foreshortened nature of the F-22 program; and now the very much-predicted slowdown of the F-35A deliveries.  The current move is to invest in the remaining fourth generation legacy aircraft.

But here again; with a nod to the criticism of the Navy, to what purpose is this investment?

For years the Air Force has trained to lean on the longest range Radar and shifted targets from the F-15 to the shorter capability F-16.  This is a well known deficit for this versatile fighter; so investing in F-15 Radar makes limited sense; but what is far clearer is continuing to upgrade the F-22 and F35 Radars such that targets from these stealthy observers can be shifted to un-stealthy shooters makes the most sense.

As a recent comment from an F-35 pilot underscored, the F-35 radar ALREADY is superior to the legacy systems.

Question: “Dog” Davis made the comment that one of his pilots was flying from Fort Worth to Eglin and was accompanied by two F-18s.  He told me that the pilot asked the F-18s could see the “clean” F-16 meeting them from Eglin a significant distance ahead.  Does that square with your experience?

Bachmann: Actually I was the pilot that General Davis was talking about.

Even in its relatively immature state, the combat systems are superior to legacy systems.

In an operational exercise in Northern Edge, this concept was clearly understood as a Return to Base was denied for the F-22 and he was ordered to continue to access and distribute targets until the bandits were demised or he ran out of fuel.

Given this much clearer operational imperative; which has been supported by years of joint exercises leads to another investment requirement.

There is a clear requirement and imperative to off board all the swept targets to a command node; such that the command node can then assess and assign targets to the joint or coalition shooters; and relieve the Stealthy Observer Pilot of this task.

As the success of the Remotely Piloted Vehicles is celebrated in Afghanistan, there arises a question as to what to do with this renowned capability in the absence of friendly skies.

How to best employ the concept of operations means considering how to extract utility when the hunters are not just friendly but are targeting you?

Shaping and Offensive and Defensive Enterprise for the 21st Century

For example, the United States relies on geographic distance for its major coastal defense; but employing Remotely Piloted Vehicles could dramatically enhance the integration of available defenses; even providing early warning relatively inexpensively, Air to Air Missiles; and some Air to surface missiles are an additional enhancement to even low speed platforms.

These are being flown currently by National Guard and Reserve Squadrons; and allowing their integration into the off shore airspace adds enormously to detecting and deterring threats.

In a very similar way; around some of the distant states and possessions of the United States that serve as staging areas or forward operating bases, a squadron of Remotely Piloted Vehicles equipped with SONAR and RADAR together with limited means of response to threat would provide great training and be a part of a layered defensive system.

Examining the Offensive Enterprise requires a similar exploitation construct as any Military Force, but adds the third dimension to the mix.  This would have the fifth generation platforms as the scouts and observers; and the fourth generation platforms as shooters to be thrown towards enemy defenses to force their response and identification as well as be the swarm to deter any further penetration.

They would, as they can now, receive targets from the fifth generation platforms; be able to verify and validate the received target; and engage either enemy air or enemy integrated air defenses to smooth the way for further operations.

The fifth generation platforms; as scouts would be admonished to not shoot lest they give away their position; but rather to expend all the weaponry from the fourth generation platforms; or from any available shooter that could reasonably engage the designated target.  If they are required to engage owing to the fact they have been detected; then shoot and scoot is the motto. This concept would seek to preserve the quantity of fifth generation assets well into the second and third day of warfare.

Apparently, our leaders are relating in as loudly as they can that our Nation will no longer ‘darken the skies’ with the quantity of Air Assets made available to our forces.

As a nation we are reaching out to coalition partners and other friendly nations to adapt our capabilities so there is a symbolic and real reserve force worldwide to thwart any determined competitor.  The United States capability must be interoperable with these forces and within our own forces to leverage what we can using situation awareness, the ability to share this situation awareness; and overwhelm competitors needs training and early employment.

Concepts for exploiting the best of fourth generation assets and available fifth generation assets; in combination with what we have learned in the first decade of Remotely Piloted Vehicles will be crucial to deterrence in the face of increasing attention to economics.

The ‘Wolfpack’ can be more than casual thought; properly employed by well trained pilots, it can change the outcome in surprising ways.

Crafting the ‘Wolfpack’ can provide a strategic advantage and a best value-leveraging proposition.

For an update on the 5th generation dynamic see the following: