One of its predecessors was VMX-22, which was established in 2003 for the express purpose of introducing the Osprey and shaped its evolving con-ops.

More than a decade later the Marines of VMX-1 are now helping to integrate the F-35B into Marine Air Ground Task Force (MAGTF) and are preparing for the next new Marine Aviation asset, the CH-53K.

The first CO of VMX-22 was then Colonel Walters.

General Walters is the current Assistant Commandant of the Marine Corps.

In an earlier interview Col. Walters indicated how the Osprey had changed operations.

They had their normal fair share of general support, resupplies, etc. But we started accelerating their use as my time there went on, and used them for both the conventional and Special Forces operations.

The Taliban has a very rudimentary but effective early warning system for counter-air.  They spaced guys around their area of interest, their headquarters, etc.  Then they would call in on cell or satellite phones to chat or track.  It was very easy for them to track.  They had names for our aircraft, like the CH-53s, which they called “Fat Cows.”

But they did not talk much about the Osprey because they were so quick and lethal.

And because of its speed and range, you did not have to come on the axis they would expect.  You could go around, or behind them and then zip in.  We also started expanding our night operations with the Osprey.  We rigged up a V-22 for battlefield illumination.

A lot of these mission sets were never designed into the V-22 but you put it into the field and configure it to do the various missions required.  And we have new software for the Ospreys in Afghanistan where you can pick your approach, angle, approach speed and let the aircraft do it all.  That is a huge safety gain.

We started the interview with Col. Rowell by recalling the original VMX-22 in this manner.

“When we were setting up the office, a Marine came in and said we had some old gear we needed to dispose of, including an older flight helmet.

I turned the helmet around and the name on it was Walters.

It now occupies the top shelf in my office.”

About 2009, the OT&E missions of HMX-1 were ported over to VMX-22 to work through innovations with the CH-53E. The same had been done with the attack and light lift/utility helicopters years earlier with VX-9.

All of those missions, along with the F-35B and CH-53K efforts, have taken root in VMX-1 as well.

The unit is one which now has its foot firmly planted into the future while simultaneously shaping today’s fight.

VMX-1’s F-35Bs are at Edwards AFB as part of the Joint Operational Test Team which is working with their developmental test counterparts to evaluate and integrate the ongoing upgrades of the aircraft.

The VMX-1 F-35Bs will come to Yuma in 2018 and will be the center of excellence for global F-35Bs as well after the Block 3F software is complete.

VMX-1 will continue to shape the demand side for the F-35B community with regard to upgrades as well.

We asked about how integrated the British have been with Rowell and his Marines.

He noted that there is very close integration.

We carrier qualified a Royal Navy pilot onboard the USS America in USMC airplanes.

There is no light between the Brits and the Marines.

On the America, you had UK maintainers, and you had observers from HMS Queen Elizabeth on board the USS America as well.”

“It is very important for the community to remain focused on commonality.

There is widespread recognition of this requirement.

The Marines are a key stakeholder in this process with the services and the allies.

We are well tied into the community to shape commonality for upgrades and shaping the way ahead.”

This applies in strategic terms to shape integrated airpower from the UK to Norway to Denmark to the Netherlands and operating off of US and UK seabases.

“The interoperability between the USMC and the UK is a key thread in that effort with our ability to operate off of each other’s ships.

It is like flying with someone else nationally but part of your own squadron.” 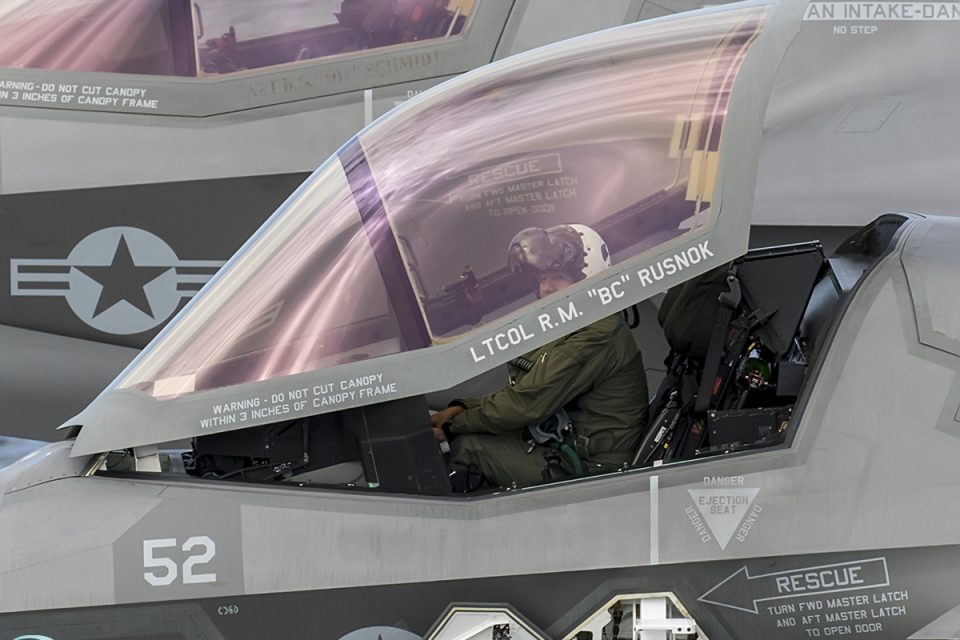 How did the maintainability go aboard the USS America during your recent tests?

“We took an aircraft and pulled the engine, drive shaft and lift fan – then reinstalled and flew it off of the ship in sea state three.

We validated many of the toughest maintenance tasks at sea with that maintenance evolution, and that jet was one of the first planes off of the boat during the Lightning Carrier demonstration.

The two Yuma squadrons plus VMX-1 were working the maintenance and almost all of the maintainers had never been to sea as well.

Availability and maintainability was good.

We did not lose any flying time due to maintainability.

Very unusual for an aircraft at this stage of the game.”

The test community is shifting its focus on airframe testing to the software upgradeability dynamic.

“We are internalizing that.

The biggest item I saw was the growing realization of what a software defined and upgradeable plane is all about. Many of your hardware dynamics are also about software.

For example, with regard to the fuel pump, what it does and how it performs is software driven.

You have to tweak the software a bit and you can get the fuel pump do what you want to do with it.”

We then discussed the coming of the CH-53K to the USMC and the role of VMX-1 in that process.

“Not only is the lift much greater and the maintainability significantly better, but the aircraft will play into the enhanced situational awareness (SA) with the F-35, along with the speed and range of the MV-22 as an assault asset.

The pilot flying the F-35 will shape much greater SA to the MV-22 and the CH-53K as they inform and support the overall assault force.

In effect, this is the flying infrastructure for the future MAGTF.

We will continue to refine the tactics, techniques and procedures (TPPs) as the force matures as well.”

Colonel Rowell received his commission upon graduation with Honors from the United States Naval Academy in 1992.  Upon completion of the Basic School, he was assigned to flight training at Naval Air Station Pensacola, Florida.

After flight training in the T-34, T-2, and TA-4J he was designated a Naval Aviator in August 1995 and reported to VMFAT-101 in MCAS El Toro, California for conversion training in the F/A-18 Hornet.

Captain Rowell reported to MAG-11 at Marine Corps Air Station Miramar, California, in 1996 for duty with VMFA(AW)-225, where he served as the Schedules Officer, Airframes Officer, Assistant Maintenance Officer and Pilot Training Officer. He made two deployments to the Western Pacific in 1997 and 1999 in support of the Unit Deployment Program. While serving with the “Vikings”, he graduated from the Weapons and Tactics Instructor course at MAWTS-1, and the TOPGUN course at the Navy Fighter Weapons School.

Captain Rowell then transferred to MCAS Yuma, Arizona in 2000 for duty as an instructor pilot at Marine Aviation Weapons and Tactics Squadron One.  During this tour he served as the Air-to-Air Employment SME, GPS Guided Weapons SME, Joint Strike Fighter SME and single-seat Forward Air Controller (Airborne) project officer.  In 2002, Captain Rowell was promoted to Major.  In 2003, Major Rowell deployed from MAWTS-1 to Al Jaber Air Base, Kuwait to augment VMFA(AW)-533 during Operation Iraqi Freedom.  During his time in Yuma, Major Rowell was also NATOPS qualified in the F-5E/F and augmented the Snipers of VMFT-401. In 2004, Major Rowell reported to Marine Corps Base Quantico, Virginia where he earned a Master’s degree in Military Studies and was a distinguished graduate of the U.S. Marine Corps Command and Staff College.

In 2005, Major Rowell reported to MAG-31 at MCAS Beaufort, South Carolina where he served as the MAG FA-18 tactics training officer for a year prior to reporting to VMFA-122 as the Aircraft Maintenance Officer. The “Crusaders” deployed to the Western Pacific in 2006 in support of the Unit Deployment Program.  Upon return, Major Rowell reported back to MAG-31 to serve as the Group Operations Officer.

After serving at MAG-31 Headquarters for a year, Lieutenant Colonel Rowell reported back to VMFA-122, the “Werewolves” in 2008 as the Executive Officer.  In September 2008, he deployed to Al Asad Air Base, Iraq in support of Operation Iraqi Freedom. In January 2009, he detached from VMFA-122 and reported to 2d Marine Aircraft Wing (Forward) for duties as Battle Captain in the Tactical Air Command Center.  During his time in the TACC, Lieutenant Colonel Rowell continued to augment VMFA-122 and VMFA-314.  He returned from Iraq in July 2009 and again assumed duties as the MAG-31 Operations Officer.

In June 2010, LtCol Rowell assumed command of VMFA(AW)-533.  Under his command, the Hawks completed a training deployment to El Centro, CA and a deployment to the Western Pacific in support of the Unit Deployment Program.  The Hawks were the first FA-18 squadron to obtain the highest level of combat readiness while on deployment, and were the recipients of the Robert M. Hanson Trophy as the 2011 Marine Fighter Squadron of the Year.

LtCol Rowell relinquished command of The Hawks in November, 2011 and served as MAG-31 Executive Officer until June, 2012 when he reported to U.S. Army War College.  He graduated from the U.S. Army War College in June, 2013 and reported to the Pentagon for duty on the Joint Staff.  He served two years in the Capabilities and Acquisition Division of the J-8 as the Strategic and Tactical Systems branch chief with responsibilities for air munitions, manned aerial systems and nuclear weapons.

Colonel Rowell has converted to the F-35B and MV-22B in anticipation of commanding Marine Operational Test and Evaluation Squadron 1.

Col Rowell has over 3400 flight hours in the F/A-18, F-5, F-35B and MV-22 with 2900 hours in the F/A-18, and has held every tactical and flight designation qualification in that aircraft. His personal awards include the Defense Meritorious Service Medal, Meritorious Service Medal with gold star, Air Medal Individual Action with combat distinguishing device, Air Medal Strike/Flight Award with numeral five, Navy/Marine Corps Commendation Medal with two gold stars and combat distinguishing device, and the Navy Achievement Medal.

The photos in the second slideshow of F-35B pilots onboard the USS America were shot by Todd Miller.