The Italians have had a number of firsts with regard to the F-35 global enterprise.

At the beginning of the 20th Century, Italy was a pioneer in combat aviation.

They are key players in the two key 21st century multinational military aviation industrial coalitions, Eurofighter and F-35, as well as establishing a center of excellence for pilot training along with introducing one of the best 21st century trainers, the Aermacchi M-346…..

The first Italian F-35 left the factory at Cameri in March 2015.

Next up was another first, the first F-35 flown across the Atlantic.

On Feb. 5, 2016, the Italian Air Force’s first F-35, AL-1 with code “32-01” and markings of the 32 Stormo Wing landed at Naval Air Station Patuxent River, Maryland, at the end of the JSF’s first ever transatlantic flight.

And then in 2017, the first F-35B ever built outside of the United States rolled out of the factory to a Ministry of Defence sponsored ceremony.

According to a press releases published on May 5, 2017:

The first Short Take-Off/Vertical Landing version of the F-35, or F-35B, assembled outside the United States rolled out of the Final Assembly and Check Out (FACO) facility here today.

The rollout exhibits the ongoing strong partnership between the Italian Ministry of Defense, industry partner Leonardo and Lockheed Martin.

The Italian FACO is owned by the Italian Ministry of Defense and is operated by Leonardo in conjunction with Lockheed Martin with a current workforce of more than 800 skilled personnel engaged in full assembly of the Conventional Take-off/Landing F-35A and F-35B aircraft variants and F-35A wing production.

“Italy is not only a valued F-35 program partner that has achieved many F-35 program ‘firsts’, but is also a critical NATO air component force, providing advanced airpower for the alliance for the coming decades,” Wilhelm said.

BL-1’s first flight is anticipated in late August and it is programmed to be delivered to the Italian Ministry of Defense in November. In addition, two Italian F-35A aircraft will deliver from Cameri this year, the first by July and the second in the fourth quarter.

To date, seven F-35As have been delivered from the Cameri FACO; four of those jets are now based at Luke Air Force Base, Arizona, for international pilot training and three are at Amendola Air Base, near Foggio on the Adriatic coast.

After a series of confidence flights from Cameri, an Italian pilot will fly their first F-35B jet to Naval Air Station Patuxent River, Maryland, early in 2018 to conduct required Electromagnetic Environmental Effects certification…..

The latest Italian first was highlighted at the International Fighter Conference 2019.

The Air Policing Mission to Iceland was to provide an air defense capability for Iceland.

The F-35 team prepared for the mission by leveraging lessons learned from an earlier Italian deployment, that one done by Italian Eurofighters.

During the mission 103 sorites were flown, with 14 at night. 159 flight hours were expended in support of these sorites. There were 8-10 planned sorties per day, with six jets available for advanced missions. There were six tango scrambles tasked from the CAOC at UEDEM. And there were two slow mover intercept training missions.

The training mission was highlighted in the slide from his presentation seen below: The logistics side of the mission went well as they were able to verify the operational capability and sustainability of the F-35s in the mission in terms of cold weather operations.

The logistical support provided to the six jets was facilitated by the supply chain support being transferred to the deployment base.

A key discriminator for the F-35 clearly is its integratability of the F-35 into the C2 process to deal with advanced threats as well which was highlighted in the following slide from his presentation: He argued that the F-35 was an “omnirole” weapons system which required no aircraft “customization” for its various roles but due to its integrated capabilities would operate seamlessly across the operational spectrum.

It was able as well to share its core tactical information through its various digital capabilities, including Link 16, MADL and VMF.

As Paolo Valpolini put it in his report on the briefing at the IFC 2019:

Talking of the advantages of the new fighter deployed by the Italian Air Force the TFA32 CO, he underlined the huge advantage of gathering information while delivering effects in different domains, all at the same time, as well as helping legacy assets to convey those effects in a better way.

Another key element was the capacity of the jet to provide valuable and very reliable information and data along the command chain, permitting decision makers to provide the right commands to the effectors according to established Rules of Engagement, all in near real time.

Coming to connectivity, the Italian detachment exploited considerably the Link 16 capabilities, for connecting with the CR and the CAOS, as well as the Multifunction Advanced Data Link (MADL) that allows direct links among the F-35 community.

As no land assets were available for air-to-ground training, the Variable Message Format (VMF) was not used.

The Iceland operational deployment was based on a build-up approach that saw Italian Air Force Lighting II deployed in Great Britain, Greece, and other European countries for training, bringing the 32nd Wing to become fully start real operations around one year after having received its IOC status.

In short, the Italians delivered on this first NATO mission as they have throughout their record of firsts in the F-35 global enterprise.

The photos in the slide show below are credited to the Italian Air Force. 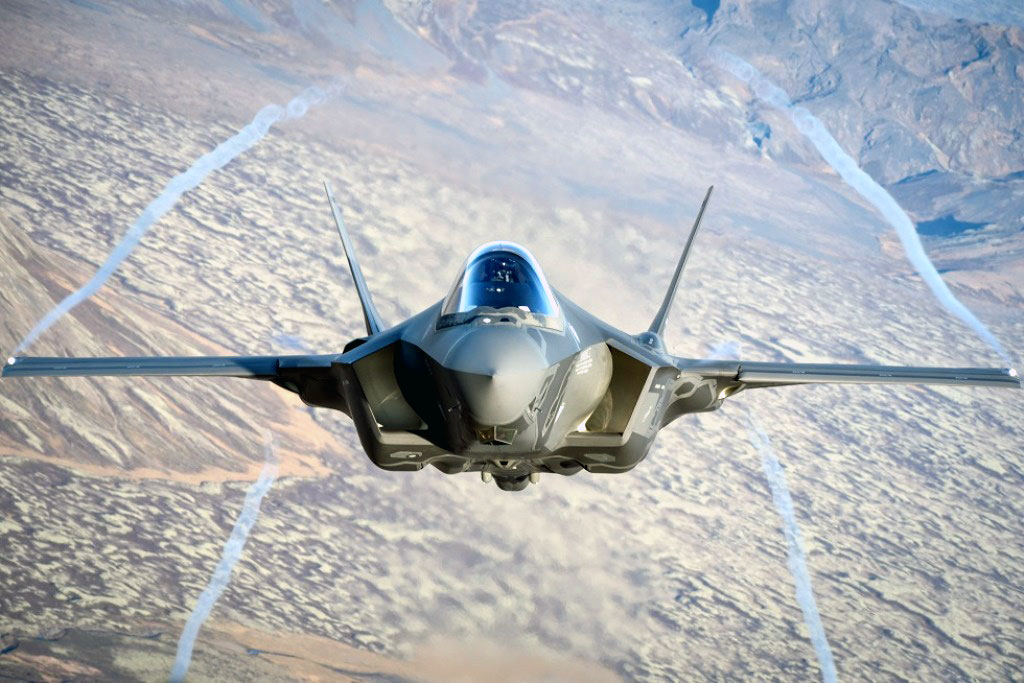