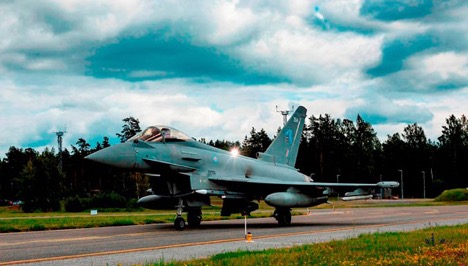 Spain, France and the United Kingdom will take up NATO’s Baltic Air Policing mission starting in May, guarding the skies over the Baltic region for the next four months.

The three NATO Allies are replacing air force detachments from Belgium and Poland which have protected the airspace of NATO’s three Baltic Allies Estonia, Latvia and Lithuania since January. The Spanish and British air force contingents will operate out of Siauliai airbase in Lithuania, while the French air force will fly from Amari in Estonia. Spain is the lead nation for the mission.

“We thank Spain, France and the UK for taking over NATO’s Baltic-air policing mission”, said NATO spokesperson Oana Lungescu. “This 24/7 mission demonstrates that our commitment to the security of our Allies is rock-solid and that our vital work goes on despite the coronavirus pandemic,” she stressed.

NATO’s Baltic Air Policing deployment is a defensive mission that sees allies sending planes to patrol the airspace of the three Baltic States, who do not have fighter jets of their own. The Air Policing programme keeps fighter jets on alert 24/7 and ready to scramble in case of suspicious air activity close to the Alliance’s borders.

The mission which has been running since 2004 took on greater prominence following Russia’s illegal annexation of Ukraine’s Crimea in 2014. NATO aircraft routinely intercept Russian military aircraft near the Baltic States which frequently fail to adhere to international air safety norms. In 2019, Allied jets attached to NATO’s Baltic air-policing mission scrambled around 200 times to safeguard allied airspace.