Next generation air platforms encompass several changes as compared to the predecessors which are at least thirty years old or older, notably in terms of design.

Next generation air platforms are designed from the ground up with the digital age as a key reality.

This means that such systems are focused on being able:

Such is the case with the CH-53K compared to its legacy ancestor, the CH-53E or with the venerable but legacy Chinook medium lift helicopter.

Comparing the legacy with the next generation is really about comparing historically designed aircraft to 21st century designed and manufactured aircraft.

As elegant as the automobiles of the 1950s clearly are, from a systems point of view, they pale in comparison to 2020s automobiles in terms of sustainability and effective performance parameters.

I have followed the progress of the CH-53K much like I have with the F-35 and the Osprey, three innovative new combat systems.

As I have argued earlier,

With peer adversaries emphasizing technological change and force modernization, focusing on strategic advantage for US and allied forces is a key element for combat success. At the heart of such an approach, clearly will be the ability to operate more effective distributed forces and to leverage the capability of US and allied forces to operate flexibly and not relying on a rigid centralized system with a core emphasis on combat mass.

Working ways to distributed force but concentrate fires is at the heart of the transformation necessary to prevail in the strategic shift. For the MAGTF, this means taking the core approach around which a MAGTF has been created and extending its reach with integrated fires, as is conceived of with regard to F-35-HIMARS integration or the use of the new G/ATOR system, and building effective force packages that can operate in an integrated but flexibly deployed distributed force.

The CH-53K comes at a time when this transition is being worked.

As the heavy lift member of the MAGTF team, the CH-53K will provide a key element of being able to carry equipment and/or personnel to the objective area. And with its ability to carry three times the external load of the CH-53E and to be able to deliver the external load to different operating bases, the aircraft will contribute significantly to distributed operations.

But the digital nature of the aircraft, and the configuration of the cockpit is a key part of its ability to contribute as well.  The aircraft is a fly-by-wire system with digital interoperability built in.

And with multiple screens in the cockpit able to manage data in a variety of ways, the aircraft can operate as a lead element, a supporting element or a distributed integrated support node to the insertion force.

A key change associated with the new digital aircraft, whether they are P-8s or Cyclone ASW helicopters, is a different kind of workflow. The screens in the aircraft can be configured to the task and data moved throughout the aircraft to facilitate a mission task-oriented work flow.

In the case of the CH-53K, the aircraft could operate as a Local Area Network for an insertion task force, or simply as a node pushing data back into the back where the Marines are operating MAGTBs.

Marines carrying MAGTB tablets onboard the CH-53K will be able to engage with the task force to understand their role at the point of insertion. The K as a digital aircraft combined with the digital transformation of the Marines create a very different ground force insertion capability.

From an operational standpoint, the K versus the E or the legacy Chinook for that matter, offers new capabilities for the combat force.

What is more difficult to grasp is how the new generation of aircraft also change how sustainability is managed and how the new aircraft provide a ramp launching a new way to manage the aircraft, and to provide for enhanced reliability for those digitally managed aircraft.

Recently, I had a chance to talk with Pierre Garant, now a program director with Sikorsky, but whom I met many years ago when he was the aviation sustainment director at Headquarters Marine Corps.

In an article which Murielle Delaporte and I wrote for Military Logistics International in 2007, we interviewed Garant with regard to how the Marines were working expeditionary logistics to support what was the disruptive impact of the Osprey.

Garant himself provided his perspective on the transformation of Marine Aviation logistics in a 2004 Marine Gazette piece.1

The simple point is that Garant has been at this for a long time.

What he brings to the CH-53E and CH-53K is years of credible experience in working 21st century transformation regarding combat logistics.

In a later article, I will focus on our discussion about the evolution of the Performance Based Logistics (PBL) framework as the approach within which digital capabilities can be wrapped to provide for significant advancements in effective maintainability and weapons system reliability.

Here I want to simply highlight some key parameters to understand what a 21st century digital next generation aircraft provides for a new sustainment approach.

What Garant argued was that by establishing an effective PBL process in place, which Sikorsky has with both the Seahawk and now with the CH-53E, they can now with the new digital aircraft embed those tools into a PBL framework.

With the PBL framework there is solid working relationship between the government and Sikorsky to better manage the supply chain and to shape more accurate data with regard to parts performance while already setting the foundation for a CH-53K PBL.

They can then take that data and rework how the supply chain can deliver a more effective outcome to reliability and effectiveness in operations.

With the data generated by the CH-53K, the “smart” aircraft becomes a participant in providing inputs to a more effective situational awareness to the real performance of the aircraft in operational conditions.

Then that data then seamlessly flows into the sustainment management system to provide a much more realistic understanding of parts performance.

This then allows the maintenance technicians and managers to provide higher levels of performance and readiness than without the data flowing from the aircraft itself.

Put in other terms, the data which the aircraft generates makes the aircraft itself an “intellectual” participant in the sustainment eco system.

The question then is how best to operate such an ecosystem?

This is a different question than the legacy aircraft and its sustainment system poses.

There the question is determining laws of averages for parts performance from collecting data, and then shaping ways to make sure parts are available at the right time and the right place.

With the aircraft as a participant in the fully-integrated eco system, much more performance is being provided in a much more timely fashion and the question then is how to work the suppliers into the eco system so that they can be informed significantly earlier about what they need to do to contribute more effectively to the fleet.

Another dimension of how the aircraft contributes to its own enhanced reliability is its ability to provide information with regard to fault isolation.

With the digital systems onboard the CH-53K, the aircraft not only generates fault detection, but can precisely isolate where that fault is to be found with accuracy.

This can eliminate false replacements, a problem which the Osprey had for many years in its initial operations.

High reliability of fault detection and fault isolation is a significant game changer for maintenance, and it is the aircraft that will generate the information for this more effective process.

Furthermore, the digital aircraft delivers a tenfold increase of actionable information that fully enables condition-based maintenance as a future reality.

And the data flows will enable a continuous learning process which can be shaped for the global fleet of the aircraft, rather than being simply being done well at one base and only word of mouth spreading the message on a new way to maintain the aircraft.

As Garant put it: “It’s almost like virtual surgeon, where his knowledge comes to the point of need.”

With all the noise about autonomous systems and AI, what one can overlook is how digital aircraft are now participants in their own maintainability.

Try that with a legacy Chinook or CH‑53E.

In short, the CH-53K is a smart aircraft birthed in a digital age that is doing support and manufacturing differently.

In other words, it’s symmetrical with a significant strategic change, rather than being a legacy system struggling to adapt to the new age.

The featured photos are from the Log Demo team at New River.

With regard to that team, see the following:

The Coming of the CH-53K: Preparing for Its Long-Term Supportability

Murielle Delaporte and Robbin Laird, “Re-crafting Expeditionary Logistics: USMC Aviation Prepares for the Future.” Military Logistics International 2, issue 6 (2007) 4-7, which can be read below: Installing a Rotor Damper on a CH-53K. 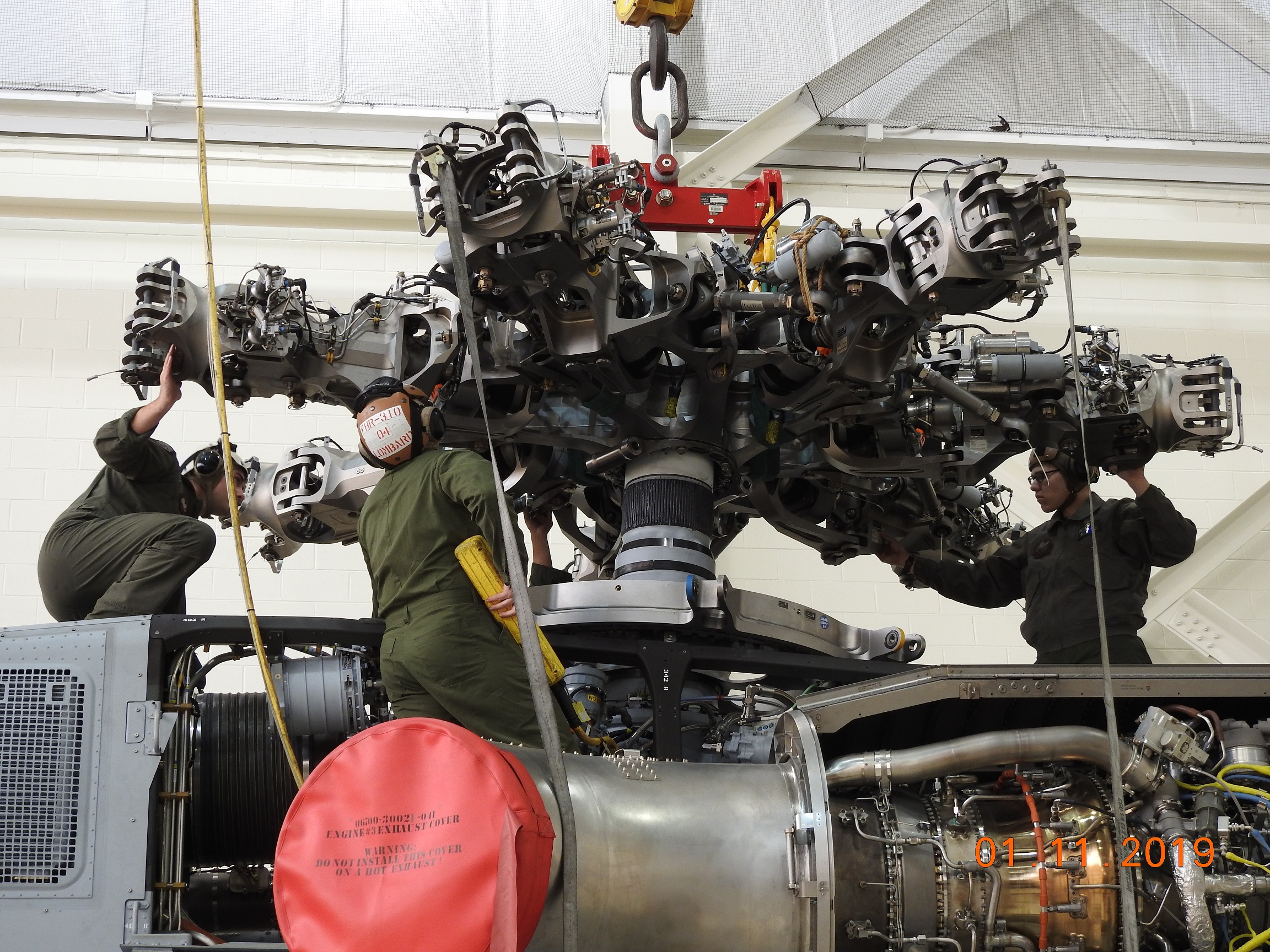