This is a key input into a significantly redesigned flight deck workflow which allows for a much more rapid turnaround of the launch and recovery of aircraft as well as more flexibility operating and arming the strike packages.

A major difference can be seen right away when one steps onto the flight deck. Next to the USS Gerald R. Ford (CVN 78) during my visit was the USS John C. Stennis whose flight island can be seen in the rear of this photo. The island on the USS Gerald R. Ford has been moved 140 feet aft and is 30% smaller. What this allows is  significant additional space  for aircraft refueling and weapons loading operations, with the area forward of the island able to accommodate  more combat aircraft.

As the ship’s captain, Capt. J.J. Cummings, put it: “If you think of the ship as a gun, and the strike force as bullets, then we have increased the size of the clip because we can load it with more bullets because of the island being further aft  on Ford versus Nimitz.” The new launch system allows for a wider range of aircraft to operate from the carrier; the new arresting gear system can recover them. The ability to mix and match the current air fleet and the future one is significantly enhanced with EMALS. The launch system has a larger aircraft weight envelope that exceeds what is available with steam, so EMALS can launch very light aircraft or heavy aircraft which means this system can accommodate future manned or unmanned aircraft.

The same flexibility exists in the Advanced Arresting Gear with larger current operating wind and weight envelopes and the capability to recover future aircraft designs with minimal modifications required.

The refueling system is designed to keep a clear path to the catapult by reducing flight deck obstructions caused by refueling hoses, weapons skids and weapons elevator access points. This highly efficient flight deck flow allows for the FORD to sustain higher launch and recovery rates.

Let me turn to each of these capabilities which add up to a new workflow on the deck which provides for a more rapid pace of ops tempo and more flexibility to mix and match mission packages as well.

Much of the press about USS Gerald R. Ford has been about its launch system, the electromagnetic aircraft launch system or EMALS.

I discussed this system at some length with Lt. Cmdr. Andy Kirchert.  There are several advantages of the system over the legacy steam catapult system which he highlighted.

First is the flexibility and adaptability of the system. The EMALS system has more room for growth for future aircraft systems. Steam will not be able to shoot super light aircraft and it can shoot heavy aircraft but that is serious wear and tear on the CAT when it shoots heavy shots. Heavy/light shots not an issue at all with EMALS.

Third, longer fly days are enabled due to reduction in the pre-flight and post flight procedures. For example, steam catapults require a heat up to be ready for launch

Fourth, the system is easier on aircraft which should led to reduction of stress on the aircraft due to launch. The system delivers very precise endspeeds for the launch process.

Fifth, the system delivers enhanced safety margins. The system will not allow launch of an aircraft if it sees something wrong in the process.

Obviously, there have been challenges with the system, but the Ford team is overcoming those challenges, but according  Lt. Cmdr. Kirchert, “We are in the fine-tuning phase.”

One might note that both the French and Indian navies are lining up to procure EMALS which suggests confidence in the system.

And similar to EMALS, AAG is designed to have the ability to operate with aircraft of varying weights, including future aircraft systems. When one visits the Advanced Arresting Gear system below deck, it is amazing to see how automated it is and how little manpower is required to operate it as well.

The refueling system is a major aspect of the redesign of workflow on the flight deck. My guide to this aspect of the ship was provided by Aviation Boatswain’s Mate (Fuels) 2nd Class Thomas Drew Watson. Post flight, aircraft are parked along two isles for refueling – one on the deck edge and the other just outside of the landing area. This parking arrangement allows unobstructed access to the catapults.

Also in common with almost all new systems, parts failures have emerged which were not anticipated but those parts are being rebuilt to provide for better performance as well. My topside visit ended with a discussion with by Rear Adm. Clapperton.

He underscored that the USS Gerald R. Ford was going to be a key enabler for the maritime distributed force which the Navy was envisaging as its way ahead for the fleet.

With an ability to provide flexible strike options to the fleet, and a capability to support new weapons, and new aircraft, the new generation carrier was a key infrastructure to support the way ahead facing the U.S. Navy, the joint and coalition force. 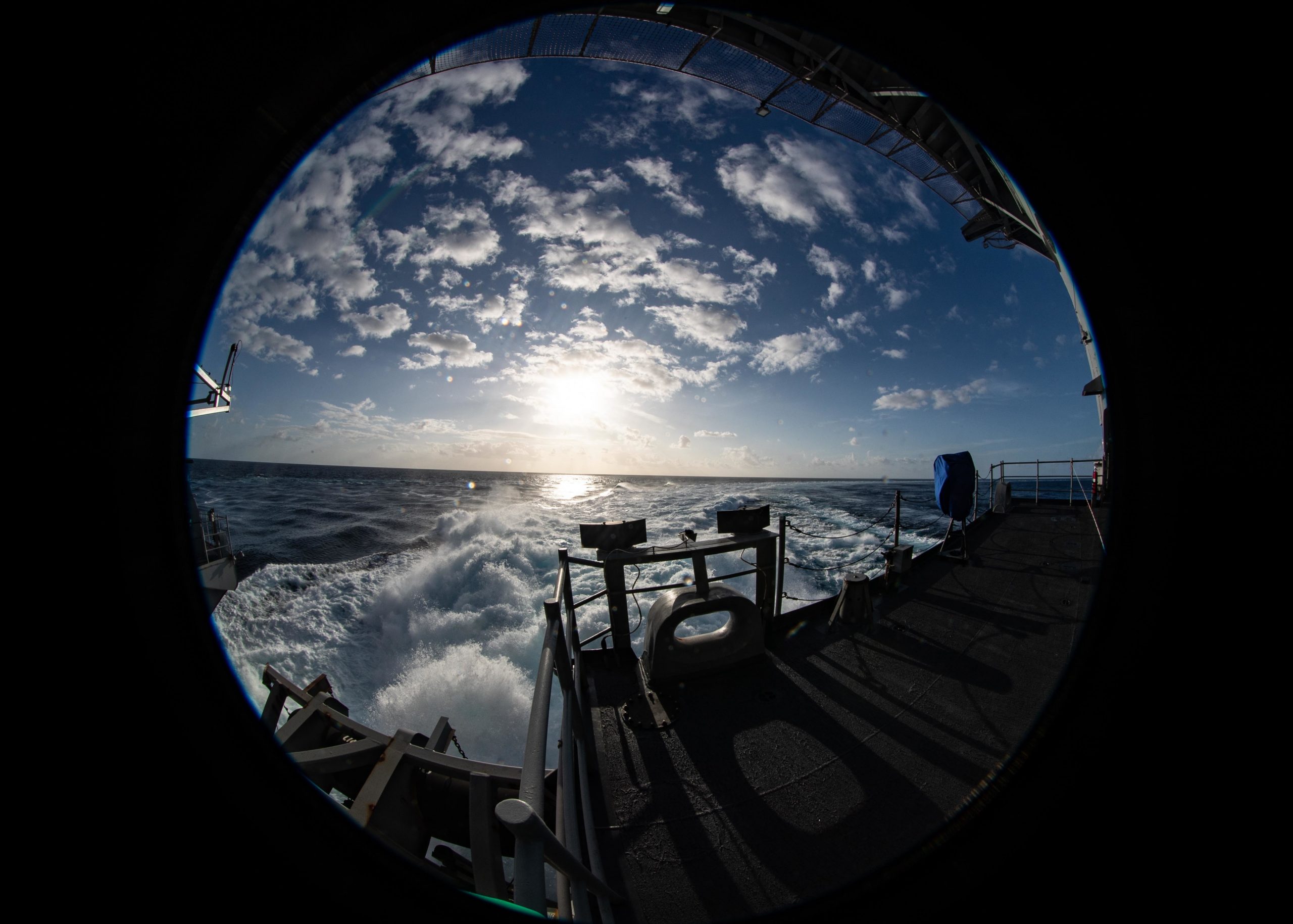